Thursday saw the welcome return of Scotland’s leading musical minstrel to the Nitten Stage as Alastair McDonald gave us a rousing and varied set that included jazz standards like Howard Johnson’s Fujiwara (Everybody Loves Ice Cream), murder ballads (Polly, Pretty Polly) and traditional favourites (The Bonny Boy).  Interspersed with anecdotes about the songs and his life as a genuine Scottish legend.

Alastair must have the most extensive repertoire of any artist on the folk scene – as he puts it himself “I’ve got a whole wheen o’ songs” and he moves effortlessly from old music hall songs (I’m No Comin Oot the Noo) to powerful  contemporary song like Billy Joel’s politically charged ‘Leningrad. and the deeply moving ‘In Guernica on Market Day’ (written by the heid Womblemeister, Mike Batt). He makes us smile, laugh and cry and, considering his years, has a sparkling energy that would put many younger performers to shame.

He is also a raconteur and storyteller ‘par excellence’ and has the rare ability of lifting a song directly from the written page & into the hearts & minds of the audience. His show would not be complete without Harry Hagan’s glorious ‘Sam the Skull’ and his tale of how he came to ‘nick’ it from his good friends Gaberlunzie is always worth retelling. 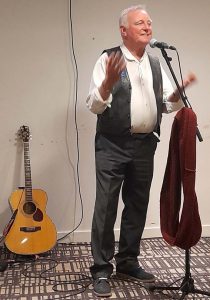 Alastair has been a performer on a full time basis since the late 60’s and has established a hugely successful career not only in his native Scotland, but all over the globe. On numerous occasions has been invited to take his own style of musical entertainment to locations as diverse as America, Canada, Germany, Denmark, Israel, Thailand, East Africa & the Arab Emirates. On Thursday night, however, he belonged to the people of Nitten Folk Club and, as he sent us home with a wee tour ‘Roond the Barras’, the audience treated him to the warmest and most sincere rousing ovation.

The excellent floor spots were provided by Ronnie, Jim, May and Janis, Paul, Keith, The Curries and a visiting friend, the wonderful George Machray. The raffle was, as usual, a great success and raised some much welcomed funds for the club’s coffers.

Next month we welcome our old friends ‘Forgaitherin’ back to the club. Based in Fife they have visited the club on many occasions and always succeed in entertaining audiences with their blend of traditional and contemporary music. Definitely a show worth braving the December weather for. We look forward to seeing you then.